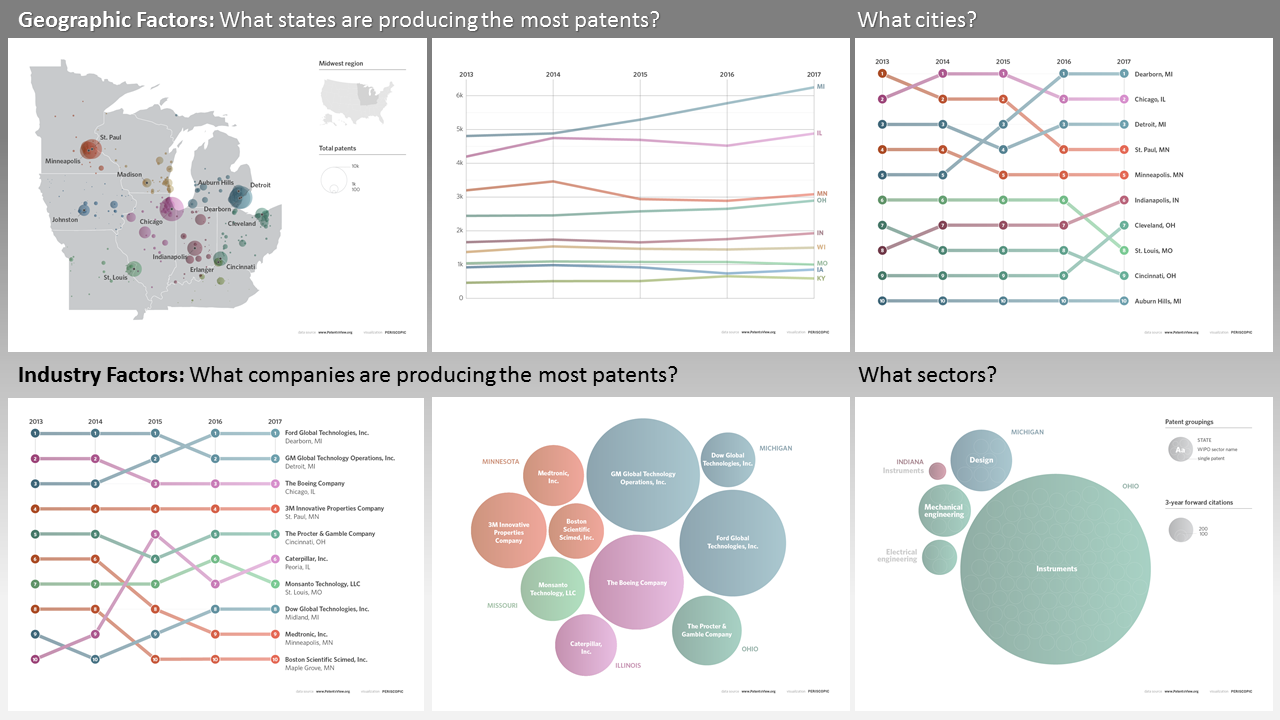 Patenting in the Midwest Region

Historically, the Midwest has been an industrial powerhouse in the United States. As we see from the map, patent activity is strong throughout all the states of the Midwest region. The top patent-producing entities are located in the vicinity of Detroit, Chicago and the Twin Cities of Minneapolis-St. Paul.  Still, the map shows additional innovation hotspots in St. Louis, Indianapolis and Cincinnati.

Patent production in the Midwest states has been fairly consistent between 2013 and 2017, with the notable exception of Michigan which experienced a sharp increase in patenting after 2014. This growth has been driven, in part, by increased patenting by Ford Global Technologies in Dearborn. Michigan is also consistently the region’s top patent producing state, followed by Illinois, Minnesota and Ohio.

Looking at the top patent-producing assignees, we see Michigan-based General Motors and Ford dominating, with Boeing and 3M not far behind. These four companies consistently lead patent production in the region.  The remaining top patent assignees reflect a diverse range of industries: Proctor & Gamble in consumer goods, Caterpillar in equipment manufacturing, Monsanto in agriculture and Medtronic in medical devices.

The number of forward citations a patent receives is indicative of its value and influence on future innovation. Highly cited patents (those having 100+ citations) are particularly impactful. The most influential patents originating from the Midwest region involve instrument technology. Ohio generates, by far, the most highly cited patents, including those for instrument technology but also those related to mechanical and electrical engineering.

These observations are reflective of the Midwest’s strong industrial heritage and its drive to innovate.

The U.S. Patent and Trademark Office’s (USPTO) Midwest Regional Office is located in Detroit, Michigan and serves Illinois, Indiana, Iowa, Kentucky, Michigan, Minnesota, Missouri, Ohio, and Wisconsin.  As the first USPTO regional office (opened July 2012), the goal of the Midwest Regional Office is to promote innovation and stimulate the economy by connecting entrepreneurs to government resources, supporting students and teachers through our STEM education programs including professional development for teachers, gathering feedback from regional stakeholders, and recruiting diverse talent from the region. For more information, see https://www.uspto.gov/about-us/uspto-locations/detroit-michigan.