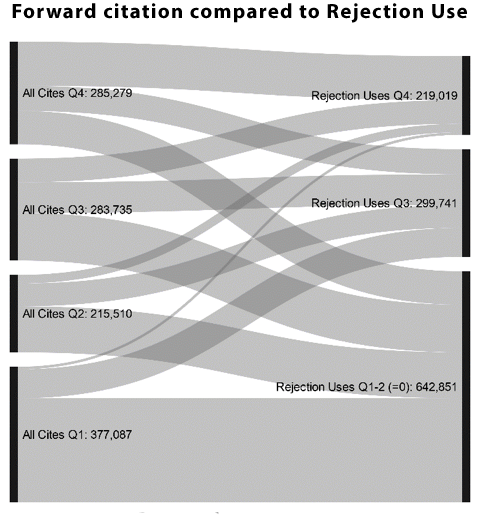 Patents Used in Patent Office Rejections as Indicators of Value

The economic literature emphasizes the importance of patent citations, particularly forward citations, as an indicator of a cited patent’s value. Studies have refined which forward citations are better indicators of value, focusing on examiner citations for example. We test a metric that arguably is closer tied to private value—the substantive use of a patent by an examiner in a patent office rejection of another pending patent application. This paper assesses how patents used in 102 and 103 rejections relate to common measures of private value—specifically patent renewal, the assertion of a patent in litigation, and the number of patent claims. We examine rejection data from U.S. patent applications pending from 2008 to 2017 and then link value data to rejection citations to patents issued from 1999 to 2007. Our findings show that rejection patents are independently, positively correlated with many of the value measurements above and beyond forward citations and examiner citations.

The Sankey diagram, above, shows the relationship between forward citation and 102 and 103 rejection use, depicting a shuffle amongst quartiles from the citation of a patent to its use in a rejection. Even patents in the lowest quartile of citation appear in the highest quartile of actual rejections, and vice versa, emphasizing the new and valuable information rejection use provides.