The extraction process used to identify government organizations, contract numbers, and grant numbers has three phases and nine steps. The phases are (1) the bulk data download process, (2) the extraction process, and (3) the cleaning and quality assurance process. The entire process is shown in Figure 1.

Phase I has three steps and starts with raw data from the U.S. Patent and Trademark Office’s (USPTO’s) publicly released information on granted U.S. patents, taken from their downloadable XML files.

Patent files are downloaded in XML format from USPTO’s bulk download site at https://bulkdata.uspto.gov/ under the heading “Patent Grant Full Text Data (No Images) (JAN 1976–PRESENT).” In 2018, this step was incorporated into the PatentsView automated data processing pipeline, making it automatic.

The XML bulk download files undergo “preprocessing” that standardizes headers for matching across files. Note that this does not change any of the downloaded data.

All steps in phase II are contained within a single python program, “NER.py.” NER is a java-based Name Entity Recognition library maintained by Stanford. This process was originally written in Perl but converted to Python 3 with everything else in 2018. 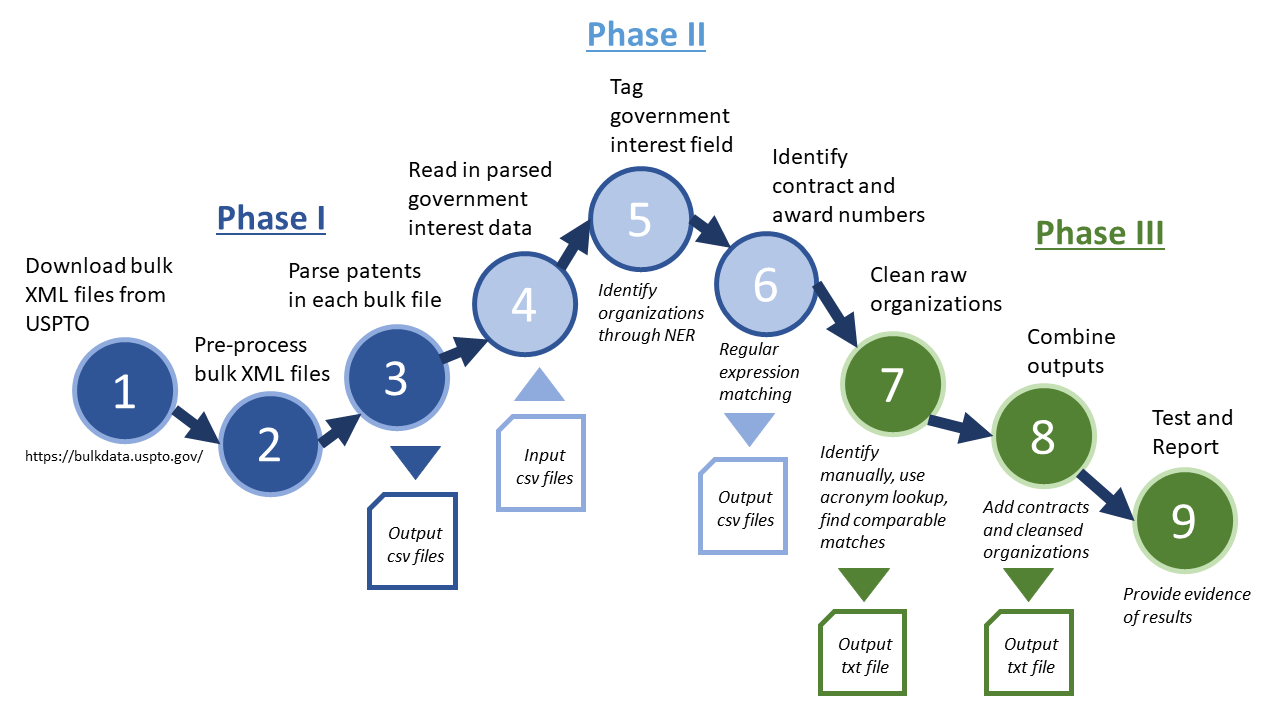 The government_interest.csv files from each output directory are combined into one complete output file for processing.

In early testing, the combination of all three models was shown to provide better results than running one in isolation. This is because NER is a machine-learning approach that returns slightly different results for each model. Duplicates are removed after combining the three models. An example of this step’s output, with organizations tagged, follows:

Government</ORGANIZATION> has rights in this invention under Contract No. DE-AC36-08GO28308 between the <ORGANIZATION>United States Department of

The algorithm begins by splitting text in the government interest field on spaces. Grant or award numbers that match on capital letters and/or numbers are then isolated as seed identifiers. Some grant or award numbers span multiple spaces (i.e., word boundaries), so it is necessary to look backward and forward to determine whether part of the number exists across word boundaries. If so, these identifiers are combined, and duplicates are removed from the seed list. In addition, unnecessary data that are identified through this algorithm, such as telephone numbers, e-mail addresses, and zip codes, are removed from the list.

Below is an example of how this algorithm works: Award numbers CA48902 and CA09206 are identified as seeds, and NCI R29 and NRSA are combined with the grant number.

After tagging and identification of organizations as well as contract and award numbers, the data must be cleaned and tested for quality before creating the final data sets. USPTO stakeholders and the PatentsView team decided that it would be best to include only the most commonly occurring federal organizations. Nonfederal or foreign organizations (including companies, universities, and state agencies) are not included in the government interest agency extraction process.

The output of the NER program is matched up to a master list of more than 300 U.S. government organizations and their corresponding acronyms to clean organization names, resolve misspellings, and remove any nonfederal organizations. The list was created manually from Wikipedia and is augmented with new organizations each time the program is run on new data. The code to perform this cleaning was originally written in R but is now in Python 3.

The final output, which contains the cleaned organization names from step 7, is added to the end of the final output produced in step 6.